Saturday 13th April, having a late night before and then having to wake up at 05:00 was not a fun start to the day, but, having to drive for an hour to Prewley Farm (SX 547 910)  to meet a Scout Group who I would be walking with this weekend. The weather was an odd one, I could not decide whether to wear shorts or not as it was very sunny so I would get warm while walking, however the group I was walking with would be going slow.

The group that I was walking with had never been out on the moor walking with full packs and camping out in the wilds. As well left Prewley Farm (SX 547 910) it was very sunny but cold. We set off for Sourton Tors Trig point (SX 543 897). This took us a some time with several stops to sort out the groups kit, shoelaces and gaiters etc. Moving off from Sourton Tors we contoured around towards the path that would led us to Kitty tor (SX 567 864). Many of the young people in the group did complain a little bit, but, that is excepted for the first they come out on the moor carrying gear. At Kitty Tor we had a snack before our descent in to what some call “Death Valley” or “Killer Valley”, for Dartmoor it defiantly lives up to the name. The descent is tricky when dry, when partly covered in ice it is a whole bag of fun! The crossing at Sandy Ford (SX 574 879) not that difficult if you have good fitting gaiters, annoyingly I had chosen not to bring mine. Luckily for me I was able to get across without getting wet feet, we then begin the long ascent up to Dinger Tor (SX 586 881). Going to Dinger was fairly interesting apart from it being steep, we followed a river up making the ascent very wet and icy, I  fell over in to a bog a few times, luckily for me with it being frozen it was only a few inches instead of being a lot deeper.

The temperature was around 6 to 8 centigrade for the most of the day in the sun, but the air was incredibly dry, after lunch in a small hollow (SX 608 873) we headed up to Hangingstone Hill (SX 617 862) where we saw the image below a wild fire around the Chat Tor (SX 555 853) around 6km away. Moving down to the peat pass and memorial on Whitehorse Hill (SX 617 855) we kept an eye on the developing fire, for while we could see the flames. 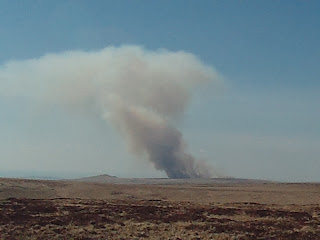 On Whitehorse Hill we had a look around for the newly discovered unopened Cist that has had some very rare finds including wooden ear studs and bronze jewellery. Unfortunately after a half hour search we abandoned the search, do us having to get to the camp site before any other teams and make that there was not another wild fire!
We reached the camp site near Teign Head Farm, (SX 636 844) around 16:00 giving us plenty of time to set up camp and get some grub. Other teams started arriving around 17:00 who had done double the amount of mileage that we had done, looking tired but in spirits especially with it being warm in the sun and out of the wind.
50.691741-4.078756

Driving in the mountains is always stunning, drivi

This is still one of my favourite photos from the