Sunday 31st March, after yet another cold night in Cwn Llwch and the clocks changing depriving us of our sleep. Not that it mattered to us as well were all in bed by about 9 and up 9 so still a good night sleep. After an amazing breakfast of chocolate bread and bacon cooked Trangia style. We were also bless with lovely weather yet again, making our short drive over to Tal-y-Bont Resivour very pleasant.

We arrived at the bottom of was is know as the “Stairway to Heaven”, which from having walked up 2 years ago for my Gold Duke of Edinburgh I knew was a very steep ascent and  most of  it being steps made it worse – well for me it did anyway. Being covered in snow made the climb quite interesting indeed, with quite a lot of people falling over including myself. On the plus side though the views where amazing and not as many people had been to these parts. This made are life a lot easier as it meant more fresh snow instead of ice.

When we reached the top we found that we where most certainly not alone with some people, on what should have been the Beacons Way now covered in a lot of snow. After a short stop we pushed on only to get assaulted by 40+ mph winds on Craig y Fan Ddu. Which was made all the more dangerous as the we were all fairly close to the crag, luckily for us though the wind was coming from the crag. After about and a hours trek we found fresh snow and where instantly turned in to school children again. With snow flying everyone with us in it! Here is the evidence. 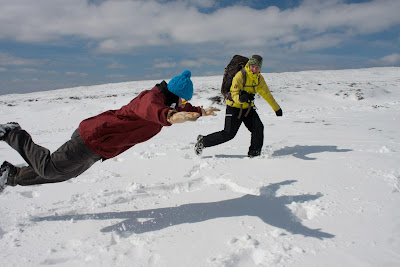 After this we headed off the beaten track so to speak. We headed across untouched snow and ice which made the going very tough. For more than an hour we headed North Westerly towards Fan y Big, across a sea of white with no features. We where not worried in the slightest with everyone being able to navigate, it was a case following our bearing and dead reckoning. The next thing we see is Fan y Big a few kilometres away and directly in front of us another snow covered crag. We hang-railed the crag all the way to Fan y Big which was fairly uneventful, minus finding lots of ski tracks and no skiers. 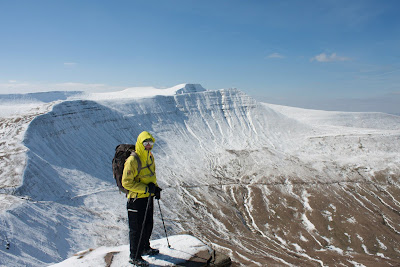 There is a 2 foot square plateau on top Fan y Big which if you are feeling brave enough you can stand on. Even though it was covered in snow we tired it anyway. The photos that we got where stunning.

We then headed back the same way to the car. Which was yet again very uneventful, being later on in the afternoon we saw nobody on the way back, we also found that a lot of snow had melted. As we descended over the Stairway to Heaven. This was the only real difficultly we encountered on the way back to the car. Back at the car it was then a nice way drive back to the camp site to aim out ny very wet feet and have some more grub before getting some sleep. for the drive home.

Thank you for reading and happy exploring.

This landscape is just stunning! And I look like a

It was a just a tad windy. Honestly the wind was p

Just about to lead @expeditionsociety up the Chala

Scotland, it's just incredible to say the least. -

Happy St David's day to everyone! While a proud D

Camping in Scotland in February, corr blimey was i